On Friday 10th May, 5 volunteer crew from Hamble Lifeboat set out to walk the coastal path around the Isle of Wight over just 3 days.  Based on the success of the Hamble Ramble last year – the group wanted to take on a new challenge, to raise funds for both the Lifeboat and the Southampton Veterans’ Drop In Centre.  The walk was also about raising awareness of independent lifeboats; the group stopped at every lifeboat station (RNLI and independent) around the Island during their walk, and even had a bride and groom from the Coast Guard divert their wedding car to stop and say hello!

The weekend started with an early rise, an 0500 rendezvous at the Lifeboat Station and onwards to Southampton Quay to catch the first Red Jet of the day over to West Cowes. The group, consisting of coxswains Grenville Houser and Paul Ackland, and crew Ian McMichael, Marie Whitehouse and Rosie Geale started their walk, passing the Cowes Lifeboat Station at 0615.  A swift yomp followed, with the crew arriving in Yarmouth in time for lunch and some photos in front of the Yarmouth Lifeboat.  The walk then started to get hilly, with the group needing to concur the cliff around Totland Bay and the Needles, prior to one last push over Tennison Down to arrive at Freshwater Independent Lifeboat Station for a much appreciated welcome and BBQ.

Day two was again a hilly one, starting in Freshwater and walking up and down the many Chines to the infamous Blackgang Chine. From there it was all downhill to Niton, and some lunch at the Buddle In, where the group were met by one of the Lifeboat trustees. Onwards, and around to hilly Ventnor, where the group were met by one of the Coastguard Rescue volunteers and his bride, who had been following them on facebook and live tracking.  After an exchange of congratulations, and a rousing three cheers for the newly weds, the group continued their trek into Sandown, ending the day at Sandown and Shanklin Independent Lifeboat.

Day three started with a hike up the Culver Down, out of Sandown and towards Bembridge, where they were met by the Press Officer of Bembridge Lifeboat and given a tour of their Tamar Class Lifeboat. They also met a former Hamble resident, Karen, who had tracked them down to say hello and wish them good luck for the remainder of their walk.  Onwards to Ryde, and a visit to the Ryde Inshore Rescue station – another of the Islands’ independent lifeboats, before setting off for East Cowes. After a quick hop across the Medina on the chain ferry – the group were met by some fellow Hamble Lifeboat Crew, who had made the jouney across to collect the group.  A final – at this point – weary hobble, to Cowes lifeboat station to complete the journey, where the group were welcomed with much needed food and drinks to celebrate the end of a successful walk.

So far, the group have raised just over £3100, which will be split equally between the two charities.  One of the walkers, Marie, who is both crew of Hamble Lifeboat, and the Patron of the Southampton Veterans’ Drop In Centre said ‘This years’ walk was a particular challenge, even more so given that we were on unfamiliar territory. However, we were all struck by how friendly and welcoming the islanders were, wishing us well, and wanting to hear all about our journey, and also residents of Hamble and surrounding villages who sent us messages of support via our facebook page.  Particular thanks must go to the crew of Freshwater, Sandown, Bembridge, Ryde and Cowes lifeboats for making us so welcome on our walk. The blisters, aches and pains are all worthwhile having seen how much we raised’.

We’d like to say a huge thank you to everyone who has sponsored us so far. The money raised will go a long way towards purchasing new Personal Protective Equipment (PPE) for the Lifeboat and to continuing the excellent work at the Veterans’ Centre.

You can still sponsor the group – their just giving page is:  https://www.justgiving.com/companyteams/greatwightwobble 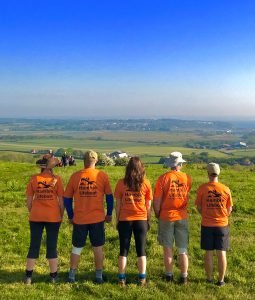